How Often Should I Floss My Teeth? Am I Flossing Too Much? 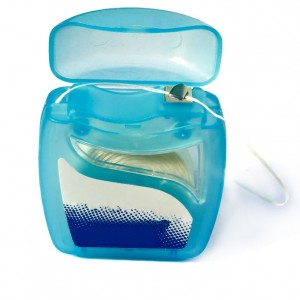 Flossing is an important part of dental hygiene. One should consider it just as beneficial as brushing their teeth in the fight to prevent plaque, cavities, and gingivitis. However, from last week's post: How to Brush Your Teeth Properly, we learned it's not beneficial to brush your teeth more than three times a day and can potentially hurt your gums. Another question we though we could clear up is; "Can you floss too much?" (Too much being more than three times a day)
The simple answer is no. If you're experiencing pain or discomfort while flossing regularly, it's more likely that you're flossing incorrectly than flossing too much. We'll get to that issue in a moment. But more importantly, we would like to respond to the question by asking another, "Why would you want to floss that much?"

Why Is It Important to Floss?

To understand why we ask that question, it's good to know a little more about flossing. Flossing is a critical element to healthy gums. Its main purpose is to remove the plaque and bacteria that forms in between the teeth, where a toothbrush will have trouble reaching. Though its purpose is to mostly help the gums, the floss' focus should remain on the tooth. When plaque builds up, it will slowly work its way down into the gums. By removing it from the teeth, you're preventing any potential health issues with your gums.
So, here's why we ask the second question. Plaque and bacteria between your teeth does not produce as quickly as it might on the outside layer of your teeth. Most plaque and bacteria in between your teeth will take about 24 hours to form. So, if you floss once a day, there's not much reason to continue flossing. Of course, if you ate a messy meal and have food stuck between your teeth, you might find a second (or even third) flossing session in a day beneficial for your comfort, however, it's not a necessary action.
So back to those who do floss several times a day and are experiencing discomfort. Most likely, you're flossing incorrectly.

3 common flossing mistakes that you should avoid:

Not Working Each Side of the Tooth

When flossing, you should place the floss between your teeth and form a C shape around one side of a tooth and scrub. Then, you should reverse your C shape and scrub the opposite side. Often, many people will only scrub one side, or neither and just "saw" the floss between the teeth. This can result in neither plaque or bacteria being removed and ultimately causing gum damage.

Forcing The Floss Between the Teeth

Another common mistake happens when two teeth are very tightly pushed together. The proper way to move floss in between the teeth is so use a sawing motion to slowly enter the tight space. If you're forcing the floss between the teeth in a snapping motion, you can cause the floss to come down hard and cut the gums, which can result in bleeding and further damage.

When you switch from one tooth to another, it's a good idea to move the floss in your hands to an un-used spot. Floss removes the plaque by scraping it off and catching most of it on the floss. If you're using the same area of floss for the next tooth, you're going to be adding plaque you already removed to a new area.

Flossing Without a Plan

Another issue that can cause discomfort, even if you are flossing numerous times a day, is missing entire sections of your teeth because you're not strategically flossing. If you're not focusing the floss between every tooth, your numerous flossing practices may not be working very well. You should start with a plan as to how you will work your way around your mouth to floss between every tooth.
Your plan is entirely up to you, but it's wise to stick to whatever that plan is. If you want to start at the very back of your lower teeth, work your way around and then do the same for the top, that's a great strategy. Whatever the plan is, just make sure to stick with it each time you floss, that way you're always sure you're cleaning every tooth.
If you avoid these common mistakes and keep a good schedule of flossing at least once a day, you'll be on your way to healthier gums and a brighter smile. If you have any questions or would like to set up an appointment with Water Tower Dental, Chicago's #1 Dental Office, contact us today, we'd be happy to talk to you more about proper dental techniques and make sure you're teeth are on their way to meet their full potential.

Posted in The Dentist Recommends | No Comments