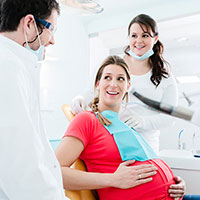 There are a lot of things that a pregnant woman shouldn’t do, such as smoke, drink, or engage in heavy physical work. The health and well-being of the baby are dependent upon the choices that Mom makes while she is pregnant.

When it comes to dental X-rays and pregnancy, many women are naturally concerned about radiation and whether it could harm their baby. While it’s ideal to forgo any unnecessary medical treatments/diagnostics until the baby has been delivered, sometimes emergencies will arise, and plans will need to change accordingly.

We’re going to look at traditional and digital X-rays and whether or not they’re safe for pregnant women and their unborn children.

Since the late 1800’s, X-rays have been used by doctors as an invaluable diagnostic tool. When they were first invented, scientists weren’t aware of how dangerous X-rays were, and some early pioneers died from radiation poisoning.

As the decades went by, traditional X-rays became safer and safer such that a person would get a higher dose of radiation from flying from Los Angeles to Boston than they would with a single dental X-ray.

Traditional X-rays require a higher dosage of radiation because they use old-school film that needs to be developed after it has been taken. Digital X-rays operate in the same mannerism as the camera on your cell phone. Instead of a film being used to create the X-ray picture, a digital image is stored on a computer.

When Not to Get a Dental X-ray?

Women who are in their third trimester might find it difficult to lay down for a dental X-ray. Other than that, there is no reason for a pregnant woman not to get a dental X-ray if her dentist advises it.

Dentists are keenly aware of the potential risks to unborn fetuses and will go out of their way to avoid any unnecessary procedures or surgeries until the baby is delivered.

When a pregnant woman has bad oral health, all of the bacteria in her mouth can easily be transmitted to the baby through her bloodstream. This can cause issues such as low birth weight and other complications. It’s safe to say that the rewards of getting teeth cleaned while pregnant far outweigh the risks.

What to Do if You’re Pregnant and Need Dental Work?

You should always tell your dentist if you’re pregnant or you think you might be pregnant. Even if it turns out that you’re not pregnant, it’s still better to be safe than sorry.

When being led into the X-ray room, it couldn’t hurt to remind the dental assistant who is setting up the machine that you’re pregnant. If you have any concerns, now is the time to express them.

As a pregnant woman, the choice whether to get an X-ray is ultimately up to you. There is a lot of misinformation out there on the internet regarding X-rays. Medical advice should not be taken from well-meaning friends and family members on Facebook.

Listen to your dentist and take his advice seriously. If he recommends a teeth cleaning or other procedure, it’s in you and your baby’s best interests to follow through and get it done.

Dental X-rays are beamed at the mouth and facial area. A lead vest is placed upon the chest of the patient to prevent any errant radiation from entering other parts of the body. The chances of a fetus getting even a slight dose of radiation are very slim. If the dental office is using a digital X-ray machine, the chances are even slimmer than a traditional X-ray.

At Water Tower Dental Care, we use state-of-the-art digital X-ray machines which put out 80% less radiation than a standard X-ray machine. Our dentists have decades of experience and know how to give oral care to pregnant women such that both they and their unborn child are entirely safe.

If you’re pregnant or think you might be, give us a call at (312) 787-2131 or schedule an appointment on our website. Our caring and gentle doctors will work hard to ensure that you have the very best oral care for both you and your baby!