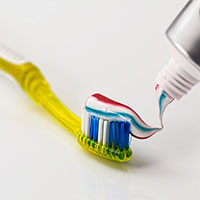 Since the mid-1950’s, the chemical fluoride has been added to the drinking water supply in most cities in our country. The Centers for Disease Control (CDC) hails community water fluoridation as one of 10 most significant public health achievements of the 20th century.

Over the past 60 years, there has been an ongoing debate as to whether or not fluoride is good or bad for human health. Doctors and dentists promote it as a miracle of modern science that plays a huge role in the dental health of any given population.

People who subscribe to the “natural living” philosophy claim that fluoride is toxic and has an adverse effect upon our health and well-being. They say that it can negatively affect the pineal glands of the brain and wreak havoc on our central nervous systems.

So, who’s right and who’s wrong?

We’re going to look at what fluoride is, why it's beneficial for dental use, and what purpose it has.

Fluoride is comprised of any chemical compound that contains a fluorine ion. Fluoride occurs naturally and is found in both soil and water at or around .01-.03 parts per million (ppm).

In 1945, public health officials in the U.S. were looking for a way to combat the rampant cavities and tooth decay that the vast majority of people suffered from. They performed experiments in communities where they added fluoride to the water supply and monitored the public health.

During the 15-year study, cavities in people who resided in communities where the water supply had fluoride added to it were reduced by 50 to 70 percent as compared to cities without water fluoridation.

Demineralization occurs faster when the bacteria in our mouths feed on the sugars in our food and create acid waste products. The acid dissolves tooth enamel and speeds up the demineralization process even faster.

By adding fluoride to the water supply (or our toothpaste), our bodies absorb it, and it helps speed up the remineralization process and combats tooth decay. Dentists will sometimes apply a gel or cream made up of fluoride to help combat cavities in their patients.

How Safe is Fluoride for Humans?

While some people will completely dismiss those who say fluoride is unsafe as “crackpots” and “conspiracy theorists,” there is some scientific evidence that claims fluoride is highly dangerous in high dosages.

On the CDC website, they have a guide to the toxicity of many chemicals, including fluoride. The “minimal risk level” is set by the CDC at 3.65mg a day. This means that the average person should consume no more than 3.65mg of fluoride a day.

Some people are asking whether the general public is getting too much fluoride on a daily basis. If you brush your teeth regularly, you are most likely doing it with toothpaste that has fluoride added to it.

If you’re a 160-pound person and drink the recommended daily allowance of tap water every day, you’re ingesting at least 1.66mg of the 3.65mg daily allowance. Because fluoride is present in our drinking water supply, any products that are made with local community water also contain fluoride:

So, does this mean we shouldn’t use fluoride?

Many dentists will say that the rewards outweigh the risks when it comes to ingesting fluoride. While there can be a toxicity effect at certain high levels, many people won’t come close to ingesting enough fluoride on a daily basis to have any noticeable results.

If you’re concerned about the limits of fluoride you and your loved ones are consuming, there are some educational websites that will tell you how to lower the amount you ingest.

But for everyone else, you should be more worried about sitting down in the dental chair only to have the dentist tell you that you have a cavity that needs to be filled. With as much sugar that’s added to the foods that we consume, the number of cavities that people suffer from will only continue to rise.

Unless a proverbial smoking gun is found by researchers that strongly supports one side of the argument over the other, the debate as to whether fluoride is safe will continue for many decades to come.

What is known is that fluoride can help prevent tooth enamel loss and that helps prevent cavities. Until medical science says otherwise, it’s best to continue to on with your daily life and worry more about getting a cavity than having the fluoride in the water supply turn you into a zombie who’s controlled by the lizard people that live on the dark side of the moon.

Posted in Food for Thought