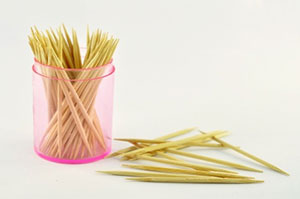 Toothpicks have been one of the most widely used tools for hygiene in the world. These simple pieces of carved wood help us free those annoying food particles stuck between our teeth after a rousing meal. But are toothpicks good for your teeth? Doesn’t the act of poking and prodding at your teeth and gums seem slightly wrong? If you have that inclination, it’s because you’re right. While toothpicks can be a helpful tool, overuse can be harmful and should call alarm to a bigger concern.

Toothpicks are one of the oldest oral hygiene inventions dating back to 3,500 BC. A bronze pendant was worn around the neck and used as a toothpick in China, and over 2,900 years later, the Chinese initialized a law that their armies use toothpicks to control their horribly bad breath. Back then, it was instructed to use any splinter of wood lying around that could clean their teeth. These days, in the United States, most toothpicks come from “toothpick trees” or white birch trees. Billions of toothpicks are made every year, which makes them quite a handy tool, but they aren’t the best for your teeth and gums.
Toothpicks have been used throughout history for a very long time, there weren’t the medical advancements and helpful products that we have now on the market. Floss, toothbrushes, mouthwash and more all do a better job at what a toothpick can do without the potential of damaging your teeth and gums.
When using a toothpick, especially at frequent use, you’re poking and prodding at sensitive areas of your gums. The more you use a toothpick, the more times you’re irritating that one spot. Imagine poking the tip of your finger with a knife. It might give you a small cut or a tiny sore. One poke isn’t going to do much, but poke that same area twice a day, for a week. You’ll notice the sore will increase in size and sensitivity. That’s what you’re doing to the small areas of your gums that a toothpick is hitting.
Instead, employ the use of dental floss and a toothbrush to clear away all debris and food that is caught in your teeth. These tools are much more effective and safer for your mouth than a toothpick.
Of course we understand you might not have floss and a toothbrush in your pocket when going out on that special dinner date or after a big ribs and corn on the cob summer barbecue. At those moments, it’s okay to use a toothpick, just don’t rely on it as your number one tool for dental hygiene. You may run into problems then.
Furthermore, if you’re finding that food gets stuck in your teeth often, you may have more troubles than you think and a toothpick can’t help you. Though small particles (ones that a toothpick can’t reach) will always find their way between your teeth, larger food pieces should be rare. If you’re having issues with food sticking between your teeth, you could be experiencing a shift in teeth, improper fillings, or a hole in your tooth. All of these problems should be properly managed before it’s too late. Consult your dentist or set up an appointment with Water Tower Dental, Chicago’s #1 rated dental practice, today.
While toothpicks might be a helpful tool sometimes for your teeth, use them sparingly; we live in a day and age with advanced tools to help take care of our teeth. Use those instead and have a bright, beautiful smile for many years.

Posted in The Dentist Recommends