The Signs and Cures for Gum Disease 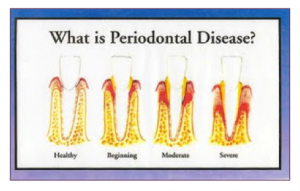 To keep a healthy smile, one must focus on the gums just as much as their teeth. Without proper care, gums can harbor many harmful types of bacteria that can result in gum disease. We already listed the best ways for proper gum care, so today we'd like to discuss the signs and cures for gum disease.

What is Gum Disease?

Gingivitis is caused by bacteria build up in plaque, a sticky, colorless film that forms on the teeth. The more plaque builds up, the more bacteria can multiply and cause harm. The gums will become inflamed and irritated. At this point, the gums can easily begin to bleed while brushing your teeth or eating certain kinds of food.
At this point, it's very easy to reverse the symptoms of gingivitis by following proper care techniques. Refer to our blog post on proper care for your gums. Brushing, flossing, and eating healthy can reverse the symptoms and keep your gums in great shape. However, if you continue to ignore the problem, more serious symptoms can occur.
When someone contracts periodontitis, bacteria will fill in the pockets where gum and bone have separated from the teeth. These small spaces allow for bacteria to multiply quickly and collect debris. The more infected the gums become, the more the bacteria are able to spread below the gum line. As the immune system fights the bacteria, and the bacteria continue to grow, more of the connective tissue between the bone and teeth is broken down. The longer this continues, the more your teeth lose their connection to the gums and will loosen and even fall out. Not a pretty sight if you ask us.
If you think you may have contracted periodontitis, consider if you are experiencing any of the following symptoms:

These symptoms are only partial signs to gum disease. Some patients can have periodontitis without knowing. Often, gum disease can only affect certain teeth.
Water Tower Dental now has three laboratory tests available to their patients that can help detect different kinds of bacteria that cannot only cause gum disease but HPV and oral cancer as well.
MyPeriol D PST test detects specific changes in DNA that might increase the risk of gum disease.
MyPerioPath are for patients with gum disease that need to know which bacteria are triggering the disease. Certain bacteria are more resistant to certain antibiotics, knowing which ones are causing the disease can help the dentist determine the best treatments.
OraRisk HPV can determine if you have an HPV infection in your mouth and if you have a high risk of contracting an HPV-related oral cancer.

To treat gingivitis and periodontitis, Water Tower Dental recommends regularly cleaning and the use of a diode laser and a procedure known as Laser Bacterial Reduction, or for more intense cases, Laser Assisted Periodontal Therapy (aka LAPT).

The biggest difference between Laser Bacterial Reduction and LAPT, other than the laser used, is that Laser Bacterial Reduction is more preventative while LAPT addresses more serious problems.
Laser Bacterial Reduction helps keep gingivitis and periodontitis at bay by addresses three issues. First it helps reduce and eliminate bacteria that can easily infect other areas of the body. Second, it keeps any infections from spreading. It’s extremely simple for bacteria to move from one area of the mouth to another. The diode laser used to kill bacteria keeps any contaminated areas from infecting others. Last, it kills any potential bacteria in the beginning stages of periodontal disease before it causes any physical destruction of the gums.

However, if the dentist discovers a full fledged periodontal disease. Using soft tissue dental lasers along with Ultrasonic Scalers, the localized laser penetrates the periodontal pockets and any disease-infected area to kill bacteria by rupturing the cell’s wall. The laser is very accurate and holds a 90% success rate in killing bacteria. Water Tower Dental recommends this treatment above any other to treating periodontal disease.
As well, antibiotics are often used to help kill bacteria that are harmful to your gums. Chlorhexidine is a general antibiotic often prescribed to help control plaque and gingivitis.
Though there are treatments for periodontitis, the best treatment is daily proper gum care. If you continue to keep healthy gums by brushing, flossing, and eat healthy, you should have no problems in the future. If you are experiencing inflammation of the gums, bleeding, or discomfort, contact Water Tower Dental today and set up an appointment to help prevent further damage.

Posted in Simple Solutions | No Comments