Proper Care for Your Gums 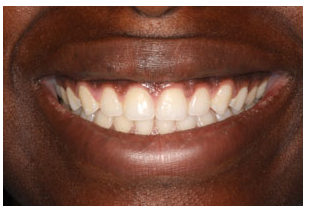 When people think of dental hygiene, they often only focus on the teeth. That's what most people see, right? Bright, white, straight teeth are the goal. However, most people neglect to consider how important it is to take care of your gums properly. While sore, sensitive gums can occur from lack of brushing and proper care, the gum's biggest threat is Periodontal Disease, or Gum Disease. According to the National Institute of Dental and Craniofacial Research, over 8% of adults and 17% of seniors over the age of 65 have periodontal disease. Without proper care of your gums, Periodontal Disease can cause red and bleeding gums, bad breath, sensitive teeth, pain while chewing, and eventually loose teeth. However, if you take the proper steps to good oral hygiene, which includes care for your gums, you will be able to avoid this terrible disease.

The first step to proper gum care is to eat healthy foods that promote the best possible gums. That starts with avoiding sugars. Sugar isn't just candy for you, it's candy for bacteria as well. Plaque forms when sugar feeds the harmful bacteria that can be roaming in your mouth.
As well, focus on eating foods that are high in Vitamin C and Zinc. Vitamin C is a great defender of your gums as it builds up white blood cells, which have the ability to fight bacteria. Zinc also improves your white blood cell count but also helps restrict the build up of plaque.
There are plenty of foods that help promote healthy gums as well. Check our list of foods that are good for your teeth.
Don't forget to drink plenty of water as well. Especially after eating, water is a great way to flush out the teeth and gums to keep any potential bacteria from forming.

Of course, brushing is a must and should be done at least twice a day. Make sure you're following a correct brushing technique. It's important to note that you don't have to brush your teeth or gums too hard. A soft touch away from the gums, yet still slightly massaging them, is the best technique.
It's best to brush at least twice a day. If possible brush after breakfast, lunch, and dinner. If you're unable to brush directly after a meal, use water to swish around in your mouth for 30 seconds. This will help clear most food and sugars from your teeth.

There are plenty of toothpastes to choose from, many with special ingredients that focus on different parts of the mouth. Of course there's plenty of teeth whitening and cavity-preventing toothpastes, but there are also ones that focus on fighting gingivitis and gum disease. If you are experiencing any of the symptoms that were listed above, think about using toothpaste that specifically focuses on the gums.

Flossing is a great way to keep food and bacteria that forms in between your teeth from traveling down into your gums. Flossing is extremely important for proper gum care. It's recommended to floss once a day. Focus on the tooth more than the gums. Though flossing is a critical element to healthy gums, it's really about removing the plaque and build up between your teeth before it reaches the gums.

Even if you take proper steps to keeping your gums healthy, there can always be complications that go much further than you think. It's recommended to visit your dentist twice a year to ensure you're on the right track to healthy gums, not just for the present, but for the future as well.
If you have any more questions, contact Water Tower Dental Care and speak to our expert dentists and team to put you on the path to healthy oral hygiene.

Posted in Teeth Technique | No Comments